Limited resources force players to make choices. Parts already serve as a kind of resource, but previously you could only obtain them by salvaging neutralized units or from a (temporary) periodic drop. In this release, crystal can be harvested and automatically be converted into parts when placed. 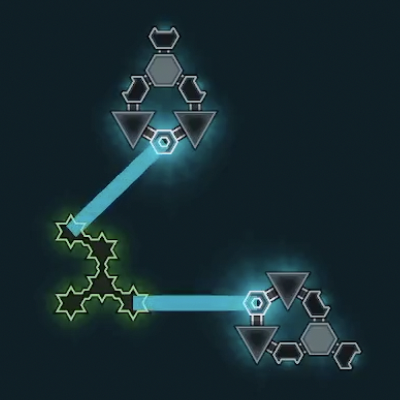 Crystal shows up next to the support counter on the right side of the toolbar. Per-part crystal costs show up in tooltips.

When placing parts, part quantities will be reduced as normal, but if they drop below zero a crystal icon will appear to show the cost to pay for the negative balance. The total crystal quantity on the right will be reduced as well, and if it goes below zero you won't be able to proceed until removing excess placements.

Following the resource changes, I've added a new construction feature. Previously, you could instantly place units without cost except for parts, but now units must be constructed in a process that takes time and leaves them vulnerable. Newly-placed parts start in a constructing state, indicated visually by placement triangles. They start with minimum HP and increase gradually while construction occurs. Parts cannot perform their usual function while under construction, so turrets won't fire and units will be immobile. Cores within the same unit automatically construct nearby parts, and external cores can assist as well to expedite the process. Overall, construction introduces a time cost, risk factor, and another new use for worker units.

Survival mode now has a larger play area and five resource deposits. Hostile units will spawn toward the top of the map. If you can survive the first few minutes, you can probably build enough to camp the spawn and survive indefinitely. It's also a bit too easy to extract parts from the map. These are definitely areas I want to improve in future releases.

Design drones on a triangle grid and wage RTS-like battles