The new claw part has a short range, ignores shields, and inflicts significant damage. It somewhat complements the launcher from the previous version, which also inflicts heavy damage but cannot fire at close range. When placed on a fast unit, claws could be useful against mobile shielded units where cannons and torpedoes are ineffective. Similar to other parts, claws inflict more damage according to their power level (which is determined by their proximity to cores). Claw units are best countered from a distance using cannons or EMP, although the steering AI needs some improvement in staying out of claw range. 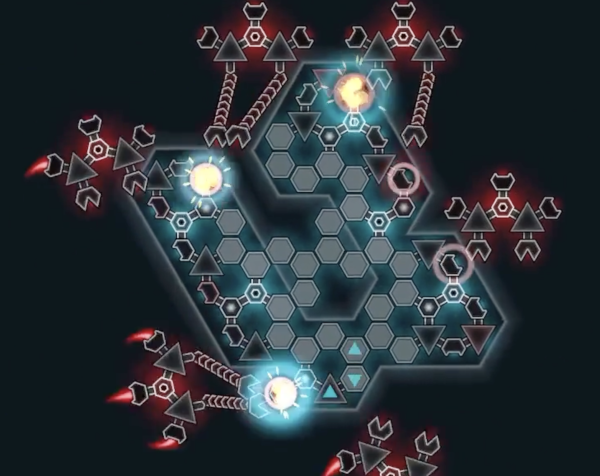 Repairing parts is now less tedious. Previously it could be done by placing new parts over any damaged ones, but now you can just press the wrench button (or ``R`` key) to order a unit to stop and wait for repair. Similar to construction before, any nearby worker units will repair damaged parts of units with repair orders. And since repair is an order, it can be cancelled (which is now mapped to ``Q``).

Part construction now uses the repair mechanic too. This means you can immediately cancel construction and get a fully-functioning unit, although it will be fragile unless allowed to repair. This could be a bit too exploitable, so eventually a damage threshold might be needed to prevent parts from functioning when damage is excessive.

Meanwhile, other areas of the game needed balancing. Survival mode difficulty ramped up too fast, and EMP could too quickly and too arbitrarily alter the course of a battle. So now the difficulty ramp is slightly less steep, EMP effects are hopefully a bit less variable, and units now avoid EMP blast epicenters with more priority. Workers have a longer cooldown after claiming cores before they can act again, reducing the frequency of back-and-forth claims battles.