If you wanted to build an indestructable base in Triverse, how would you do it? First, you'd want lots of shields and firepower, swapping out thrusters and mobility to do so. You might end up with a stationary platform that can defend against anything that approaches it. Of course, an attacker could simply keep sending forces to eventually overpower your base using cannons and EMP, but it might not be an efficient use of resources

This is where the torpedo launcher comes in, a new part that fires slow-moving, high-yield projectiles that travel in a straight line. They are great against large or immobile targets, meaning static defenses will never be enough and should be accompanied by mobile defenders. On the attacking side, since torpedoes are not suitable against mobile units, you'll probably want to escort your torpedo bombers with fighters equipped with cannons or EMP. 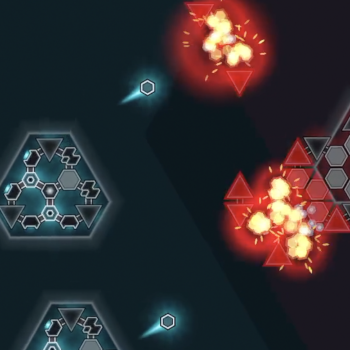 The torpedo launcher part is now available in version 0.5 and included in several default blueprints. The toolbar is starting to get a bit crowded, so either switch to full screen or scroll to the right to see all the blueprints available.